Overdevelopment? Misallocation of resources? Positive effects?
The consequences of the boom on the urban/suburban landscape and our society.

Watch The Money Go Round

“Given the rogue nature of the industry in this province, I’m not surprised someone calling for more transparency and professionalism would be considered a threat. In a sector that often seems unregulated, it has never been easier to make gobs of cash – legally or illegally. Few want to jeopardize the dynamics that are allowing many to get filthy rich very quickly.”
– from ‘Oversight of British Columbia’s housing market is a sham’, Gary Mason, G&M, 31 May 2016

“Representatives of two real estate companies are traveling with the B.C. Premier on a trade mission to Asia, raising questions about the optics of the perceived partnership at a time when many are calling for an end to foreign real estate investment.
The B.C. government lists more than 60 companies taking part in the trade mission to Korea, Japan and the Philippines as part of the province’s strategy to create more international trading partners.
Listed among those companies are two real estate brokerages Nu Stream Realty and Sutton West Coast Realty.”
“It’s bad optics,” said University of British Columbia business professor Tsur Somerville.
“At a time when people in the Lower Mainland are very concerned about the extent to which foreign capital is driving up prices here and contributing to affordability options, it seems a little bit politically dicey to take [brokerage] firms … along on a trip to Asia.”
– from ‘B.C. real estate companies join Christy Clark on trade mission to Asia’, CBC, 28 May 2016 [hat-tip 3rdRock]

“Who is going to drive our buses and make art?”

Gayle Swain shared the story of her outof-the-ordinary Vancouver-born parents while sitting at a sidewalk table with four friends at Wicked Café, at Seventh and Hemlock. One of those friends was born in B.C., in Port Alberni, while two are immigrants, from Britain and the U.S.
The foursome had mixed feelings about what is happening to this fast-changing city, where relatively few have deep roots.
Even though they valued how the world’s cultures peacefully coexist in the city, they also regretted how in-migration has been a factor in the city’s fast-rising housing prices and in the way neighbourhoods are becoming “construction zones.”
When a flashy sports car interrupted their conversation by roaring down Hemlock, the friends also commented on how traffic in the city was becoming increasingly “aggressive” and “crazy.”
—

Justin Fung is among the Vancouver-born who are struggling with whether they should become more mobile.
Fung has a solid career in Vancouver’s high-tech industry. But he believes he could get more out of his salary if he moved to the Seattle or San Francisco areas.
Fung, his wife (also born in Vancouver) and young daughter squeeze into a small condo in Vancouver. “There’s no space to yourself.”
He believes the family could afford to live in a larger home, even a detached one, in the U.S.’s West Coast high-tech regions.
Many of Fung’s ethnic Chinese and Caucasian friends with children have already moved to the suburbs or other cities.
“But some are already coming back to Vancouver. They miss the city and there’s a long commute,” he said. “I feel frustrated at where this city is going.”
The key reason Fung’s family is trying to stay close to the west side of Vancouver is to be near his inlaws and parents, who immigrated to Canada from Hong Kong in the 1970s.
Fung attended Eric Hamber Secondary School, where he said the student population in the 1990s became 95 per cent Asian, most with roots in Hong Kong and Taiwan.
“There was a kind of cultural exchange when I was attending high school in Vancouver. But I think that’s largely missing now,” he said, adding: “There’s a general negativity” about Metro’s in-migration trends.
“I’m very pro-immigrant for the right kind of people, for those with skills who will bring innovation,” Fung said.
But, echoing the findings of UBC geographers and others, Fung regrets how the federal government has welcomed many “wealthy people who drive up housing prices and treat this as a resort town.”
When Fung visits his parents on the west side of Vancouver, he notices many of the neighbouring houses are empty. It’s leading, he said, to a “hollowing out” of the city’s culture.
—

Lorne Korman, a psychologist, is among the 16 per cent of Metro Vancouver’s population who have arrived from other Canadian provinces or territories. He was raised in Montreal and has worked in Toronto.
He finds Metro Vancouver’s inhabitants are “less connected” than Quebeckers and more “laidback” than Torontonians. “In Montreal, we knew all our neighbours. We’d always be having a cup of coffee or glass of wine with them,” said Korman, who came to B.C. a decade ago with his Chinese-Canadian wife.
Living in Richmond and working in Vancouver, he has found residents of the growing metropolis tend to be “friendly on the outside. But you can never quite know what’s happening underneath. They’re polite, they make eye contact, but they’re harder to get to know.”
Given the city’s high mobility rate, Korman isn’t surprised a Vancouver Foundation study discovered that “loneliness” is a leading anxiety of city residents.
Even though Metro has a reputation as a “Lotus Land” of nature lovers and yoga practitioners, Korman said he’s found it surprisingly right wing.
“The B.C. Liberals aren’t really liberals.” He thinks the predominance of right-wing politicians is due to an exaggerated individualism among the relatively transient population.
The clinical psychologist says residents have allowed B.C. politicians to cut mental-health services to the marrow, unlike in Ontario. Too many people in Metro Vancouver, he says, “have a let-them-eat-cake kind of attitude. People without a voice are being neglected.”
With house prices and rents soaring in part because of wealthy newcomers, Korman wonders about the future of community and the middle and lower classes. “Who is going to drive our buses and make art?”
He finds Metro Vancouver has a “surreal” quality. As he cycles each day to his Broadway office from Richmond, he notices how many grand-looking new houses are, despite appearances, vacant.
“Their sprinklers go on in the rain.”
—

– from ‘In mobile Metro Vancouver, third-generation locals are hard to find’, Douglas Todd, Vancouver Sun, May 1, 2016

Posted in 12. Effects of Development

The Gentrification of the Mind

“My book is a kind of love letter to the city as it was and before it got overtaken by money. Money, for me, may not immediately kill people in the way terrorism does, but it does certainly change the fabric of daily life in much deeper and more insidious ways. The terrorist may be defeated in 50 or 20 or 10 years, but money is going to be much harder to defeat.”
– Luc Sante, cultural historian, as quoted by Sukhdev Sandhu in The Guardian, 2 Jan 2016

“It doesn’t just effect the price of real estate. It effects the way people think; it causes a kind of ‘Gentrification of the Mind’.”
– Christian Viveros-Fauné, art critic for The Village Voice, paraphrased from a ‘The Conversation’ podcast

Posted in 12. Effects of Development, 14. Social Effects of the Boom, 15. Misallocation of Resources 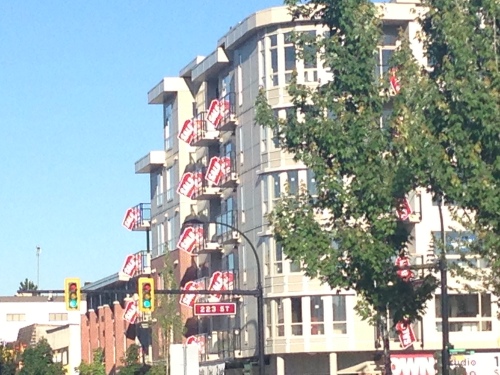 Posted in 02. Profiting from the Boom, 05. Where do Buyers get the money?, 08. Overextended Buyers, 12. Effects of Development, 15. Misallocation of Resources

Trump on Vancouver – “Your people, they go to New York, they go all over the world, and they speak so highly.”

“I love Vancouver. I have had so much experience with Vancouver and with people who live here. You don’t even realize how important it is in terms of a destination and also your people they go to New York, they go all over the world and they speak so highly.”
– Donald Trump, as quoted in ‘Trumps announce exclusive tower deal in Vancouver’, CBC.ca, 19 Jun 2013 [hat-tip jesse/YVR]

Did he try to say that people in New York speak highly of Vancouver, but just couldn’t?
– vreaa

Posted in 12. Effects of Development, 14. Social Effects of the Boom, 15. Misallocation of Resources

“My best guess: this property is now an ‘investment hold’ and will be built ‘when prices recover’. Good luck on that!”

“The dominos start to fall: SFR Project on indefinite hold in Van West!
This is a property I have been watching for some time: 4988 Chancellor Boulevard in University, Vancouver West. A 7,700 square foot lot with an old house in an exclusive area of mostly older homes, with a few new builds. Sold under MLS V951758 in June 2012 for about $2,600,000 listing was at $2,688,000; by June 2012, properties in Van West were already coming under some price pressure. After it was sold, a sign appeared on the site, advertising a new 4,500 square foot modern architectural home to be ‘built in 2013′ with completion by 2014, priced at $5,188,000 under V989612 still active, but listing now says ‘completion in 18-24 months’. However, after about 6 weeks the sign disappeared and from June 2012 through last week the house was vacant and there were no signs of construction. Then last week April 10, several large U-Haul trucks arrived and a pickup toting a boat. Now, there is furniture in the house, a new ‘beware of dog’ sign on the front and from the shoes outside the front door, it appears it has been rented to a family plates on vehicles are BC. Normally, a family doesn’t move lock, stock and barrel into a house on a month-to-month tenancy, so I’m guessing they have a longer lease, but I cannot find a rental listing. The developer of the new house, Natural Balance Premium Home Builders, does not list this house on its website and the purported architect, Frits de Vries’, website does not mention this project.
My best guess: this property is now an ‘investment hold’ and will be built ‘when the prices recover.’Good luck on that!”
– RFM at VCI, April 15th, 2013 at 7:37am

Posted in 12. Effects of Development

The following ‘Vancouver City Hall: Housing Report Card 2012’ appears at VanCityBuzz 8 April 2013.
The cheekily truthpacked revised version below that is from a source that is as yet unknown to us (but was passed on via e-mail by ‘B’, 9 Apr 2013). 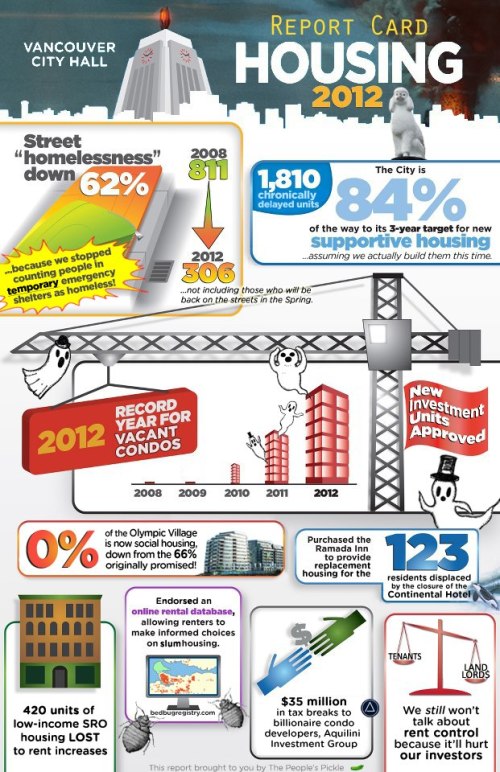 Posted in 12. Effects of Development, 13. 2010 Olympics Related, 14. Social Effects of the Boom, 15. Misallocation of Resources