The Carrion Have The Carcass – “I’ve lived in Vancouver since 1968; my wife was born here; we are about to leave; this town has priced us out. All that is left are the investors and the very rich visitors.” 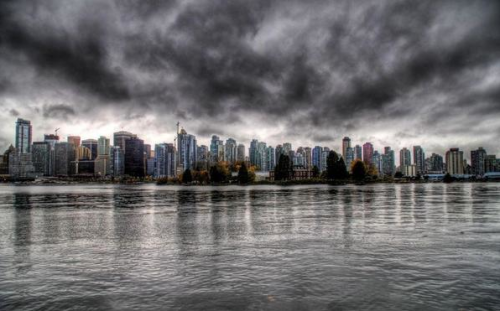 “I have lived in Vancouver since 1968 and my wife was born here, as was her mother, and now we are about to leave because this town, and I call it a town, because it not a real city, has priced us out. The things that made Vancouver great have been hollowed out, sold off or torn away and unfortunately all that is left are the investors and the very rich visitors. The carrion have the carcass.”
– Johnny Lee, at VREAA, 22 April 2018 [image from The Vancouver Sun]

Canadian real estate related debt tapering? That would be ridiculous! Filings obtained from the Office of the Superintendent of Financial Institutions (OSFI) show, after a brief decline in January, the balance of loans secured by residential real estate hit a new high in February. More interesting is the segment of loans being used for personal consumption, is growing at the fastest pace in years…
Loans secured by real estate hit a new all-time high in February. The total balance of loans secured with real estate racked up to $283.65 billion, up 0.77% from the month before. This represents a 7.79% increase compared to the same month last year. It almost looked like Canadians were reeling that debt in January, with a tiny decline. Instead it made a monster move, more than making up the ground lost the month before…
The total of loans secured with residential real estate for non-business purposes spiked in February. The outstanding balance reached $251.64 billion, a 0.77% increase from the month before. This represented a 6.83% climb compared to the same month last year. This brings the total to an all-time high. … The annual rate of 6.83% is the fastest rate of growth since… well, since banks started reporting these numbers on their balance sheets. Apparently higher rates aren’t slowing borrowers down.
– chart and text from ‘Congrats! Canadians Just Set A New Record For Borrowing Against Their Homes’, Daniel Wong, Better Dwelling, 18 April 2018

When Canadian RE goes down, it will have weights around its ankles. -ed.

“I asked a group of young people how many of them thought they’d be in Vancouver in two years, and 17 out of 18 said that they would be moving.” – Mayoral Candidate Shauna Sylvester

“I was in a session the other day with a group of young people, and I asked them how many of them thought they’d be in Vancouver in two years, and 17 out of 18 said that they would be moving. They were tired of being evicted, they couldn’t find affordable housing. My daughter, Rowan, who is 23, can’t live in Vancouver because she can’t find an affordable rental.” [Goes on to discuss her ideas about housing policy]
– Shauna Sylvester, Independent candidate for Mayor of Vancouver, from interview posted on youtube, Vancouver Sun, 5 Apr 2018

A recent report from Zoocasa shows that even the least expensive cities in the country can require a major financial commitment for solo buyers. Experts say individuals shouldn’t be spending more than three times their annual income on a home. But according to Zoocasa’s report, the average buyer would have little choice but to break that rule.

“Overall, even in the least housing expensive markets, home ownership is a significant expense for single people in Canada,” Zoocasa CEO Lauren Haw said. “Our report found that a single homebuyer would need to spend a minimum of four times their annual income to be able to afford a home on in their own.”

“Though we expected to see Vancouver and Toronto up at the top of the most unaffordable regions list, we were surprised to see just how high the price-to-income ratio was in these cities,” said Haw. “This demonstrates that home ownership in Canada’s major urban areas on a single income would be very difficult, if not impossible by measures of affordability.”

Keep in mind that a ratio of 5 (yes, five) is historically seen as ‘severely unaffordable’. – ed.