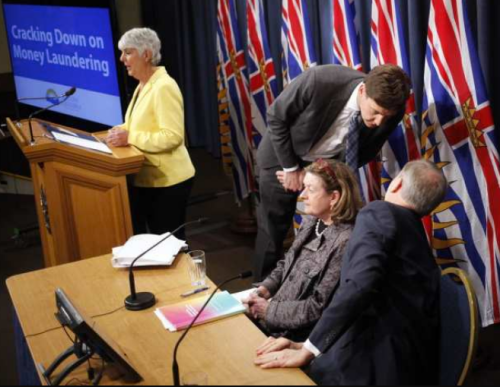 “The cost of buying a home in B.C. increased by as much as five per cent last year due to more than $5 billion in dirty money from organized crime laundered through the province’s real estate sector, according to a new expert panel report.

Former deputy attorney general Maureen Maloney chaired the panel on money laundering, which released a report Thursday that concluded it “cautiously estimates that almost five per cent of the value of real estate transactions in the province result from money laundering investment.”

In addition, she concluded: “The estimated impact of that would be to increase housing prices by about five per cent.”

An extra 5% price rise last year? Gee, that’d be the difference between supernatural 7% a year housing price increases that have characterized our bubble, and… inflation (about 2%). [But we don’t think this means we can conclude that this has been a long term effect. It may have been, but we can’t be sure].
As readers of this blog know, we’ve long thought that the primary driver of the bubble has been local buyers prepared to extend debt to the gills to get in, and that those buyers have been particularly besotted by the ‘Chinese-are-coming’ story.
There has, of course, been a direct effect of foreign-buyer-demand, but this pales when compared to local speculation.
Money-laundering juice certainly could have contributed, both directly, and perhaps more importantly indirectly by further cementing the foreign-demand story.
Interesting to think that it may have been a critically important amount.
With a coming clampdown (or even threat of a clampdown) it’ll be interesting to see the effects this has on prices going forward.
Speculators (foreign and local) hate falling markets, and floor prices determined by fundamentals are far below.
– vreaa