COVID-19 the Pin for the Highly Debt-Leveraged Vancouver RE Bubble? 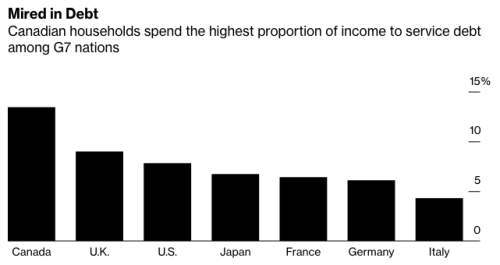 “While lockdowns, job losses and uncertainty are roiling property markets from the U.K. to Australia to Hong Kong, Canada’s situation is more precarious than most. As its oil sector shriveled in recent years, Canada’s economy became ever more driven by real estate, an industry now in a state of paralysis. Nearly one in three workers has applied for income support.
What’s more, its households are among the world’s most indebted, poorly placed to weather the storm.

“I think it is the Great Reckoning,” says Douglas Hoyes, a bankruptcy trustee in Kitchener, Ontario. “We’ve been in a period for so long where it didn’t matter what property you bought or how highly leveraged you were. Well, guess what? Now it matters.”

Since the economy began shuttering in mid-March to slow the spread of coronavirus, policy makers have raced to buttress the property market. Banks are offering mortgage holidays, including to landlords with multiple loans on investment properties.

That has raised eyebrows even within the real estate industry. “Should someone with four properties really be granted financial assistance?” asks Steve Saretsky, a Vancouver realtor. “Where exactly do we draw the line?”

The country may not have much of a choice but to prop up housing. Real estate has become Canada’s largest sector. Including residential construction, it accounted for 15% of economic output last year; energy accounted for 9%.

If it collapses, there’s not much that can pick up the slack — certainly not oil nor the seemingly unflappable consumer.

Canadians have been on a two decade spending spree since a downward shift in mortgage rates began in the 1990s. Toronto and Vancouver, the two biggest housing markets, haven’t had a major correction during that time. Housing turned into a wealth-conjuring machine. As values spiraled higher, homeowners felt richer — they spent more, borrowed more, and sent prices even higher.

That virtuous circle just popped. The City of Vancouver fears it’s heading for insolvency after it surveyed residents and found that 45% of households say they can’t pay their full mortgage next month and a quarter expect to pay less than half of their property tax bills this year.

It’s a stunning contrast to 2016, when those lucky enough to own a detached house in the west coast city watched their net worth balloon on average by more than C$1,600 ($1,130) a day without ever leaving home. In one year, the city’s properties surged in value by C$47 billion, more than double the cumulative take-home income of all its residents.

Tellingly, billboards by the consumer financial watchdog began cropping up — “Don’t use your house like an ATM” — as homeowners borrowed against those gains to fund renovations, vacations, and rental properties.

Today, Canadian households owe C$1.76 for every dollar in disposable income. In Vancouver, that spikes to more than C$2.30 — a ratio that puts the so-called supercar capital of North America on par with Iceland before the global financial crisis.

Recessions tend to be deeper and last longer when households are mired in debt — an alarming prospect for a nation that may already be experiencing its sharpest contraction on record. Canadians owe C$2.3 trillion in mortgages, credit card, and other consumer debt, about equal to the country’s GDP, which is an even higher ratio than the U.S. had before its housing bust.

“You have all of these flammable items that just need a spark, some external shock,” says Anthony Scilipoti, president of Toronto-based Veritas Investment Research Corp. “And this virus is a worst-case scenario none of us would have predicted.”

It doesn’t take much to tip a seemingly tight market into a meltdown. If only 2% of the housing stock were to be listed for sale, it would trigger the kind of supply shock behind a 1990 crash, according to Veritas.

That’s most likely to come from investors, half of whom weren’t generating enough cash to cover the cost of owning their rental properties, Veritas found in a survey last September.

For loss-making landlords, things are about to get a lot worse: about 30% of apartment rent due April 1 went uncollected, according to estimates by CIBC Economics. That’s in line with similar estimates of U.S. rental collections.

Then there are those who invested in properties for the short-term rental market that’s all but dried up because of travel restrictions. Nearly a third of Canada’s Airbnb hosts — who jointly had 170,000 active listings in late 2019 — need the income to avoid foreclosure or eviction, Airbnb said in a letter to the Canadian government last month.

Confronting a swiftly collapsing pool of renters, more than 200 Canadian listings have exploded across Vrbo and Airbnb in recent weeks pitching themselves as isolation or quarantine havens, many offering Covid-19 discounts, according to data from Toronto-based Harmari, which analyzes online classifieds. Former Airbnb rental units have also cropped up in sales listings.

Economists and lenders have long pointed to two pillars that have underpinned housing: a robust labor market and the biggest increase in international immigration in more than a century. Neither is holding up.

Nearly 6 million Canadians have applied for income support. Lenders had deferred nearly 600,000 mortgages, about 12% of the mortgages they hold, as of April 9. Meanwhile, immigration targets, based upon an earlier growing labor shortage, will almost certainly be scaled back.

In steps that dwarf those taken during the global financial crisis, the federal housing agency and the Bank of Canada are ready to purchase billions of dollars worth of mortgages and mortgage-backed securities to backstop the market, while lawmakers passed a historic wage bill to stem job losses.

“It’s great we have a government that says they have the fiscal firepower to do this but anyone with any math skills can calculate that my daughter’s grandchildren aren’t even going to be able to pay this off,” says Reza Sabour, a Vancouver mortgage broker. “What’s the plan after?”

One could not have imagined that it may happen this way. The Vancouver RE market has for almost 20 years seemed to some of us to have been an ever-expanding speculative bubble on extremely precarious footing, awaiting a shock sufficient enough to deflate it. Even the 2008 financial crisis did not prove up to the task, largely (and perversely) because that crisis resulted in a bailout that we didn’t need in the form of free money. But the COVID-19 corona virus, for all its horrors and uncertainties, may finally force speculation out of this market. It has already punished Vancouver economic staples such as tourism, recreation, international education, air-bnb, construction, cruise ships, immigrants with cash… it’s hard to imagine how this body-blow could be easily overcome. As of this week there are still some voices of RE optimism regarding this being another blip from which we will inevitably recover. But it seems like the full reality of the necessary response to the pandemic is only now beginning to sink in. Its effects could take RE prices a long way back towards fundamentals determined by rental income streams and local incomes (levels far below recent sales prices). This is an outcome that a minority of us have called for and desired for a long time, but not one of us would have wanted it to come about through such an undesirable and hurtful mechanism.

Vancouver appears to have weathered the ‘first wave’ of COVID fairly well, without many citizens succumbing to the virus, and without our medical services being overwhelmed. This was very fortunate. We are now, after 4 weeks of ‘shutdown’, in the very challenging position of trying to calculate how to ‘reopen’, knowing that only a very small percentage of the population are now immune (possibly 5% or even lower). The re-emergence will have to be done carefully and in a very measured fashion. Ideally, it would require very labour intensive antibody testing, case identification, and contact tracking. We are not yet set up to do this (and an affordable quick reliable antibody test is not yet available). Germany is leading the way with reopening and we’ll doubtlessly be watching closely. Regardless, our population will be vulnerable until there is either an effective treatment, a vaccine, or ‘herd immunity’ (the last of these essentially meaning that 50-80% of the population would have had to have had the illness, with a substantial number getting very ill and a small minority [but still many thousands of citizens] dying). It is hard to imagine a way out that does not involve ongoing greatly decreased social and economic activity.
This is a daunting prospect, and we hope and trust that our city will be able to survive well, and emerge healthy at the end of it all.

We wish all readers strength and good fortune, and good health for themselves and their loved ones.
Stay safe and well; stay sane.
Find productive, nurturing things to do within the lockdown restrictions.
Keep in touch with family, friends and other fellow citizens.
This will pass, but be ready for it to take some time. Likely many months.