Vancouver RE – ‘Heaven’ At A ‘Perfect Price’ 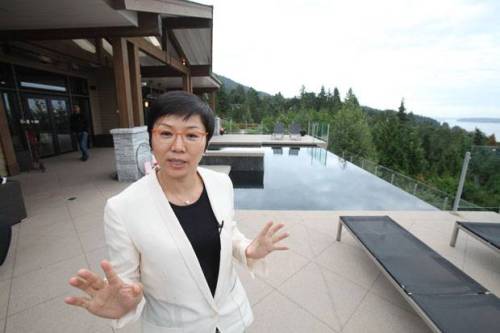 “Qiqi Hong walks past her sleek, blue-tiled hot tub and an infinity pool that seems to disappear like a waterfall into the chilly air above West Vancouver. She leans on the patio railing and breathes in the majestic ocean view that takes in the towering Douglas firs of Stanley Park, the skyscrapers of Vancouver, the Asia-bound freighters anchored in English Bay and – way off in the misty distance – the faint, rugged outline of Gabriola Island.

“We’re in heaven,” says Ms. Hong. “I can’t find any house that can compare to my house.”

The serene West Coast lifestyle did not come cheaply: Ms. Hong’s home cost $6-million. But it is an investment she can easily afford. The irrepressible businesswoman founded a successful lighting-design business in Beijing that thrived in China’s building boom. It now has more than 100 employees. But tired of Beijing’s hectic pace and foul air, she decided to come to Vancouver – after looking in Switzerland, Germany and the United States – on the Canadian government’s immigrant investor program in 2011. She now also owns three other houses on Vancouver’s west side, each valued in excess of $1.3-million, as well as a downtown condo she uses on weekends and lends to visiting friends.…

“Some now say Vancouver is a bedroom community for the world.”…

“In my opinion, I think it’s good for the economy,” Ms. Hong says, noting that the number of Chinese residents on her street has soared in recent years and that the local businessman she bought her house from made a cool $1.5-million more than he originally paid. “In Vancouver,” Ms. Hong says, “the house prices are perfect.”

Dan Scarrow, who recently opened an office in Shanghai for Vancouver-based Macdonald Realty Ltd., one of the largest real estate firms in British Columbia, makes no apologies for courting prospective home buyers in China. He says 178 of the firm’s 531 sales of single-family detached homes within Vancouver’s city limits last year – or 33.5 per cent – went to buyers with ties to China. …

“Vancouver has become a global resort city. The prices have decoupled from local wages,” says Mr. Scarrow, whose mother, Lynn Hsu, moved from Taiwan to Vancouver in 1979 and is now president and majority owner of Macdonald Realty.

As he pursues investors in Shanghai, he intends to steer buyers toward commercial properties if they have no interest in settling down in Vancouver. Some foreign buyers have purchased Vancouver real estate purely as an investment, without occupying the properties or renting them out, but that has triggered some resentment because it’s sometimes seen as detracting from the vitality of a neighbourhood.

But in general, Mr. Scarrow believes the positives of offshore money far outweigh negatives. Baby boomers can cash out at a profit and downsize with enough money left to help out their children. Selling houses also increases sales of appliances, furniture and home renovations. Vancouver’s housing market has become an important ecosystem unto itself, which explains why developers are anxious to keep foreign money flowing.

Unwise to get into bidding wars with multi-millionaires who think they are buying ‘heaven’.
Perhaps the ‘Monaco’ scenario (kinda akin to “bedroom community for the world” scenario) will come to pass, and Vancouver RE will forever be disconnected from local fundamentals. Or perhaps not.
-ed.