“How is it Seattle, just 3 hours away, can produce the people and capital to create and run such great engines of capitalism, but in Vancouver all you have are greedy rats flipping their homes and telling themselves it’s the best place on Earth?”

“I just looked at a beautiful 580 sq foot first floor studio in Seattle’s Capitol Hill, about a 10 minute walk to downtown, for $179,000 dollars.
Here in Seattle there is Boeing, Microsoft, Amazon, Costco, Jones Soda, Starbucks and a company that every real estate board in Canada would prefer that you never ever ever know exists, namely zillow.com.
All of these companies were founded in Seattle. There are dozens of others that have their US base here like Nintendo, Expedia and Holland America Line.
How is it Seattle, just 3 hours away from Vancouver, can produce the people and capital to create and run such great engines of capitalism and in Vancouver its like greedy rats flipping their homes and telling themselves its the best place on Earth?
My reading of the situation is simply that the level of cognitive dissonance and delusion is just absolutely beyond comprehension.
Please Vancouver, explain yourself. Actually, never mind: the market and its natural forces will deliver the explanation to you in a hurricane like catastrophe soon enough.”
– Bob at VREAA 6 Oct 2012 at 5:59pm and 6:07pm

It is fair to compare Vancouver RE with that in Seattle, and we come up sorely overpriced.
– vreaa

Posted in 08. Overextended Buyers, 12. Effects of Development, 15. Misallocation of Resources

What Would You Pay For This House? 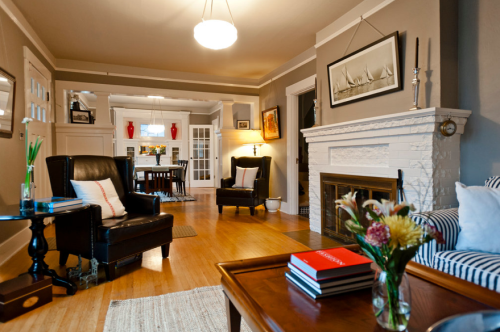 “This three-bedroom Craftsman was built in 1922 and retains its original hardwood floors and crown molding. The living room has a wood-burning brick fireplace.
The dining room features original hutches and shelves.
The kitchen, which opens onto a back deck, was completely renovated with the addition of new wooden cabinets and floors, lighting fixtures and stainless-steel appliances.
The master bedroom is on the main level; there are two bedrooms upstairs, where there’s also a family room that opens to a balcony.
Behind the house, there’s a sitting area with a pergola, a few garden beds and a concrete patio.”

More on the property:

SIZE: 2,460 square feet
PRICE PER SQUARE FOOT: $202.85
SETTING: This house is in the North Admiral neighborhood in the western part of Seattle on a small peninsula between Elliott Bay and the Puget Sound. The architecture includes Tudors, Dutch Colonials, Victorians and Craftsmans; more contemporary houses dot nearby bluffs and have better views of the city skyline, the bay and the sound.
Three blocks away is the neighborhood’s commercial strip, California Avenue, which has bars, banks, cafes, restaurants, grocers and the Admiral Theater, a 1942 Art Deco movie theater and concert hall. Several parks are within a mile, including the 53-acre Schmitz Preserve Park with its old growth forest and walking paths, Alki Beach Park and Hamilton Viewpoint, which overlooks Elliott Bay and the city skyline.
The house is five and a half miles from downtown.
INSIDE: The two-story house was built in 1922 and renovated within the last four years. It has retained the original hardwood floors, crown molding, and built-in hutches in the dining room. On the first floor, there’s a living room with a wood-burning brick fireplace, a formal dining room, a kitchen and a master bedroom. The kitchen, which opens onto a back deck, was completely renovated with the addition of wooden cabinets and floors, lighting fixtures and stainless-steel appliances. The carpeted second floor has two bedrooms and a family room that opens to a balcony. One of the house’s dormers was finished with drywall and shelves to make a small playroom.
OUTDOOR SPACE: There’s a small fenced-in front yard. Behind the house is a sitting area with a pergola, a few garden beds and a concrete patio.

All sounds very reasonable, by Vancouver standards.
Houses like these will likely sell for even less at Seattle’s bottom, perhaps below $400K.
In Vancouver? Definitely far below the $1.5+M that such a property would now be asking on the West-side.
$500K would represent 66% off. Hmmm. That could never happen, surely?
– vreaa

Posted in 07. Avoiding Vancouver, 14. Social Effects of the Boom

“We have high responsibility jobs for good employers, and do well financially, but not well enough to afford what we think is reasonable for two people like us, a single family home with a yard.”

“My wife and I have good jobs in high standing professions. Between us, we have five university degrees in hard science fields (with a sixth at the doctoral level underway) all from top three Canadian universities. We have high responsibility jobs for good employers, and do well financially, but not well enough to afford what we think is reasonable for two people like us, a single family home with a yard. We are good with our money and have solid nest egg already built. We cannot justify spending 80% of our income to be able to afford a single family home anywhere within an hour of the downtown core.
We also visit Seattle regularly. In Seattle, we would both make double or more than we would here in Vancouver, with housing at half the price, and the same climate. Similar circumstances exist elsewhere in Canada. While our families are here, we want to start our family in a place where we can provide our children with opportunities, not where every last dollar goes to real estate.
To put a point on it, people like my wife and I are being groomed by our employers to take on senior leadership roles in their organizations down the road. The problem for our employers is that we won’t be here – we can’t have the family we want, along with quality of life we desire and can easily obtain elsewhere.
I look forward to leaving this real-estate obsessed burg. Unless things change, things are going to get a lot worse here before they get better.”
– Vancouver In The Rearview at VREAA 6 Nov 2011 8:06pm

Posted in 07. Avoiding Vancouver, 14. Social Effects of the Boom, 15. Misallocation of Resources

“I landed a job in Seattle working for Microsoft and we will be moving there November 1.”

“I have reached my goal, I landed a great job in Seattle working for Microsoft and we will be moving there November 1. Seattle is a much much larger metro than Vancouver and it has more to offer. It is definitely underrated but the world is catching on to it quickly. They are building so many new public works projects that the city will be in constant change over the next 10-15 years. Also housing is considered affordable when compared to Vancouver. The neighbourhoods in Seattle trump any of those compared to Vancouver, they are amazingly clean and very unique with great architecture to boot. I know Vancouver has some nice spots as we live in Kits, but when you compare it to the Seattle equivalents none of our areas really measure up. We will be able to actually afford a nice house in a nice area at around $800,000-$1,000,000 depending on the area. (Maybe I should say this is in a nice middle class to upper middle class area. If we want to live in a nicer area than this then we would be spending $1,250,000-sky is the limit. My point is homes there are going for what feels like half the amount.) We are all just so excited to be a part of such a wonderful place while surrounding ourselves by highly educated people. We think it is a tremendous service to our children to have this experience. We’ll even have sufficient funds to provide our children private schooling if we choose to go that route and the schools there are quite nice. We are doing our part as parents and we are teaching them that putting all your money in a single asset is just plain stupid. Here is why we are not going to miss Vancouver. Yes we like Vancouver but the affordability is out of control and we own our place. The cost/benefit analysis does not add up and there are places on this planet that are just as nice if not nicer that we can live and be happy while being able to save sufficiently for our retirements. We could not be more pleased.”
– Brad in Van, greaterfool.ca, 13 Sep 2011, 10:21am and 10:24am

Ok, ok, Seattle’s nice, we get the picture. 😉
As the comedian said to his toddler son, eager to see his Dad at day’s end: “Okay, okay… you’ve got the job!”
An interesting story for its eagerness, and the quality of emotional relief (which we suspect is partly related to housing issues, but partly related to the new job). – vreaa

Seattle RE Price Growth A Tad Above Headline Inflation Since 1990 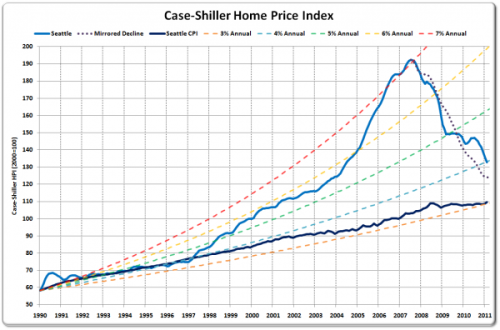 [Hat-tip to ‘commenter-with-many-names’ for shouting this chart out.]

Posted in 11. Regrets about Investing in RE, 15. Misallocation of Resources

Our run up has been greater and our fall will be greater. – vreaa