Trudeau States The Paradox: “The inflated housing market must be stabilized, but any action must not completely devalue those people whose retirements and equity are tied to their homes.”

Prime Minister Justin Trudeau says his government is concerned about the ballooning cost of housing in Vancouver and Toronto but it wants to be certain any action it takes doesn’t make the problem worse.

Speaking Friday morning on CBC Radio in Vancouver, Trudeau said any solutions will require collaboration between all levels of government, as well as academics and stakeholders.

He said overseas money is playing a role in fuelling superheated markets such as Vancouver, where the average price of a single-family detached home is $1.5 million.

But Trudeau cautioned that any federal measures to cap soaring house prices could backfire elsewhere in the country.

He said officials are examining Australia’s decision to tax homes owned by foreigners, but warns federal levers to curb offshore ownership in Vancouver or Toronto have the potential to harm other regions of the country where overseas investment can be beneficial.

Trudeau was scheduled to attend several events in Vancouver on Friday, including a roundtable on housing affordability attended by industry experts and several Metro Vancouver Liberal members of Parliament.

“How do we make sure we are helping people (in Vancouver) in exactly the right and targeted way,” Trudeau said. “That is where the kind of collaboration we haven’t had for 10 years between the federal government and different orders of government is so important to work on together.”

Most Vancouver homeowners know the inflated housing market must be stabilized, because the current trajectory “doesn’t have any good outcomes,” he added.

But any action must not completely devalue those people whose retirements and equity are tied to their homes, he said.

“We just have to make sure we are keeping people protected in how we stabilize it.”

It’s going to be interesting watching Trudeau and his surrogates try to land a B52 on a sail-boat.
In a Bubble, it is beyond the powers of government to orchestrate either ‘stability’, or a ‘soft landing’. -ed.

Question: “Why should a condo in Vancouver cost more than a condo in Toronto (or any other big city in Canada)?”

Alternative Answer: “It’s a Bubble, Stupid.” (full marks, but no bonus due to unnecessary impoliteness)

Incorrect Answers: “Supply and Demand”, “Everybody Wants One (or two or three)”, “The Views”, “Only Insiders Will Be Able To Live Here”, “Because Downsizers Are Richer Here”, “We Are Running Out Of… Fresh Air?”

Points Further Deducted For Any Answer Qualified With: “Last Year I Made More Money In RE Than In My Last 20 Years Working As A (xyz)” or “What Else Are You Going To Do With Your Money?”

Back of the Class: “(anything involving the words ‘Property Ladder’ or ‘Bullet-Proof’)”, “I’ll Get Rich, Rich I Tell You!! (manic laughter)”

Major condo developers in Vancouver are shutting out average buyers by selling their most affordable new units privately – to clients of select realtors and “family and friends” – before their advertised sale dates, The Globe and Mail has learned.
—
Eager buyers camp out in lineups for hours or days before the sales events. Thousands also sign up online to get “VIP” access, only to find out on opening day they had no chance. Several have said they were then invited to buy something more expensive.
—
Mr. Rennie said developers advertise to the public as a sort of fallback policy. If the insiders who get first dibs do not buy enough units, they can sell what is left to the next tier of interested buyers.
—
Toronto realtor Andrew la Fleur said condos are selling out to insiders in that hot market, too. He said he is one of the few agents whose clients get first crack at properties before the public. He estimates 95 per cent to 100 per cent of new condos are sold to insiders that way. “I think the public is just unfortunately misinformed or uneducated,” Mr. la Fleur said. “Those of us in the industry can see this coming a mile away and we know how to get our clients in at an opportune time.”
However, he said he does not think most units in Toronto will be flipped, because condo prices are not increasing in that city like they are in Vancouver.
– from ‘Vancouver developers shutting out regular buyers with insider condo sales’, Kathy Tomlinson, G&M, 17 Jun 2016 [hat-tip 3rdRock]

The average price of a single-family detached home in the Greater Vancouver area has increased as much in the past five months as it did from 1981 to 2005.

So profound, it deserves to be said again:
“The average price of a single-family detached home in the Greater Vancouver area has increased as much in the past five months as it did from 1981 to 2005.”
– from ‘World Out Of Whack! Which of these crazy real estate markets will be the first to bust?’, Zerohedge, 16 Jun 2016

For Those Who Have Lost All Perspective, Think On This 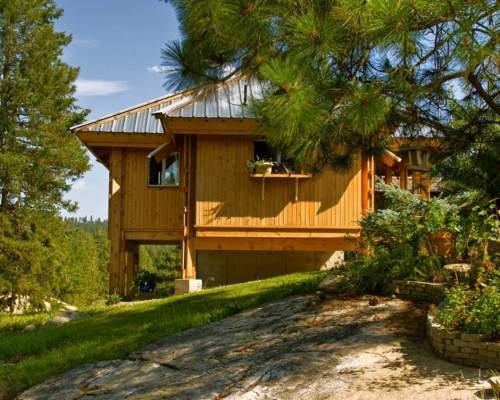 After surviving a serious illness and divorce, Denise Franklin was more than ready to start over. With a $25,000 budget, she approached architect Henry Yorke Mann to help her build a home fit for a fresh start in rural British Columbia. Mann saved money by severely restricting the size and material cost. Designing the 280-square-foot space in a mandala shape, Mann gave this home all the essentials and more. Franklin loves nature, and it was important that the home feel connected to the outdoors. A front porch reaches out into her front yard and vegetable garden. Mann used all natural and local materials — no synthetic or plastic materials were used in any part of the home. Durable, insulated metal roofing keeps the home well protected from the elements.
– from ‘Tiny B.C. cabin — at 280 sq. ft. — provides more than enough space to start a new life, and garden’, National Post, 14 Jun 2016 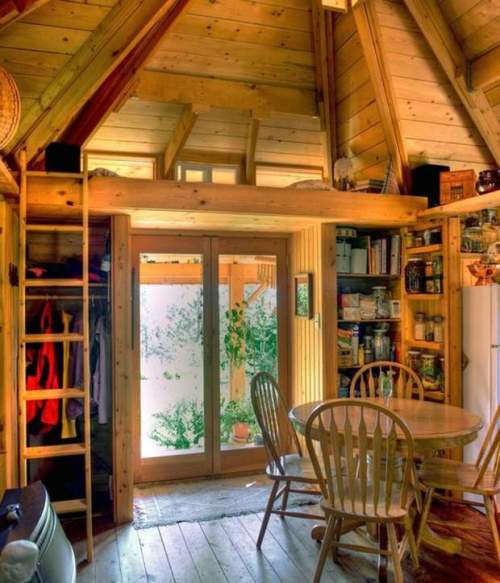