“Vancouver is perhaps the most bubbilicious, distorted real estate market in North America right now. It’s as bad as anything that happened in America. Maybe even worse.”

‘tincup’ sent us the following by e-mail : “Thought this might be worth archiving.  On episode #145 of the KunstlerCast [24 Feb 2011] with James Kunstler (noted but controversial American author [* for context, see addendum. -ed.]) he says the following in response to a listener’s call regarding Vancouver Real Estate (The listener’s call starts at 24:48 and his comments start at 26:50 in the itunes podcast, or at his website KunstlerCast_145_Listener_Mailbag):
“Yeah, Vancouver is perhaps the most bubbilicious, distorted real estate market in North America right now.  It’s as bad as anything that happened in America. It’s as bad as anything that happened in the San Francisco Bay area, or Los Angeles, or Florida, or Las Vegas. Maybe even worse.”
He goes on about drug money and Asian investors too.
Regards, Tincup” [Thanks, tincup. – ed.]

Expanded version of exchange tincup refers to::
Caller: “Hello, Michael King calling from Vancouver BC responding to the podcast on Australia… it got into the issue of.. there’s a trend in Anglo-American countries for young people to look for housing in city centres as a response, a revolt, against the suburban lifestyle unfortunately, here in Vancouver, in the Lower mainland, which is the greater suburban area, there is move for people under the age of 35 or so to go to the suburbs and this has become quite a noticeable trend here.. … it may have something to do with the fact that in Vancouver, which may or may not be in a real estate bubble, you’re looking at about 400,000 Canadian dollars for a 600-700 sqft 1 bedroom condo in the downtown core. So, for many people, this is absolutely unattainable, for that amount of money, or even less, you can have your suburban palace…”
Kunstler: “I’ve been to Vancouver about 4 times in the last 6 years or so, and I got a very very substantial tour of the suburban outlands there, I saw a lot of them. And, there’s a couple of things going on… Vancouver is perhaps the most bubbilicious distorted real estate market in North America right now. It’s as bad as anything that happened in America. It’s as bad as anything that happened in the San Francisco Bay area, or Los Angeles, or Florida, or Las Vegas. Maybe even worse. … [comments about condo development and ‘new suburban stuff’] … What I was seeing when I was there, was real estate near the centre being hideously overpriced, and what was probably going to turn into an over-supply of suburban stuff way outside the city … you’re paying a premium to be close to the centre … for the most part they’re pretty car dependent … They do have some light rail out there but not nearly on the European level … and simply not adequate to serve this vast suburban outland. It’s an extremely distorted market…”
—

Kunstler (and the caller) argue that prices near the core are forcing people away from the city centre, into the lower mainland suburbs. Our perception, however, is that value (what you get for your money) is poor all over the area,  and, if anything, the bubble has caused some to leave or avoid the area entirely (rather than acting as a local centrifugal force). At this very moment, it is true that some peripheral markets have started dropping (Okanagan, Vancouver Island) and some have stalled (Northshore), but this is likely the effect of the beginnings of the bubble implosion, rather than a lasting effect. In other words, we wouldn’t see the bubble as having a sustained, longterm influence over choosing urban or suburban homes. Value is poor everywhere. We also expect eventual price percentage drops to be pretty much the same in all areas. – vreaa
—

* Addendum: Here’s what Ben McGrath had to say about Kunstler in The New Yorker [‘The Dystopians’, 26 Jan 2009] –
..author James Howard Kunstler, whose 1993 book about suburban sprawl, “The Geography of Nowhere,” is a staple of collegiate urban-studies curricula, and whose weekly blog column, Clusterfuck Nation, can be read as a sustained critique of the cheerful globalism championed by Thomas Friedman. His latest contribution to the doomersphere is an engaging novel, “World Made by Hand,” set in the post-collapse future, and while it’s not apocalyptic by the standards of, say, Cormac McCarthy’s “The Road,” it is comprehensive in its imagination of the disasters that await us: dirty bombs and race wars and dengue fever and flu epidemics and forced shavings by religious fanatics and hurricanes in New England in June. (Kunstler resists the doomer label-“I’ve never been a complete collapsitarian,” he says-but the fact that one of his bombs detonates in Washington on “twelve twenty-one” is likely to please superstitious adherents of the Maya calendar, which concludes its first cycle on what is now the Internet’s most popular day of reckoning: December 21, 2012.) “World Made by Hand” is set in a small town north of Albany, where the residents have no oil, no coffee, no spices, no mail delivery, and only sporadic electricity, but marijuana cultivation is booming and they’re growing “buds the size of plums.” Capitalism and human ingenuity persist; it’s only the economic incentives that change. “The action is going to be in smaller towns in the years ahead, because the cities are going to be so problematic,” he told me.

Posted in 01. He Said, She Said, 14. Social Effects of the Boom, 15. Misallocation of Resources

CBC CPP Discussion – Panelist: “By the time somebody retires, they should have no debt”; Moderator: “But how realistic is that?”

From today’s panel discussion on CBC Radio’s The Current, regarding Canadian Pension Plan reform [23 Nov 2010] –
Panelist: “By the time somebody retires, they should have no debt”.
Moderator: “But how realistic is that?”

“The Mayor of Vancouver is worried about sales of Olympic Village condos. They are not selling fast enough and he worries about another real estate slump.” 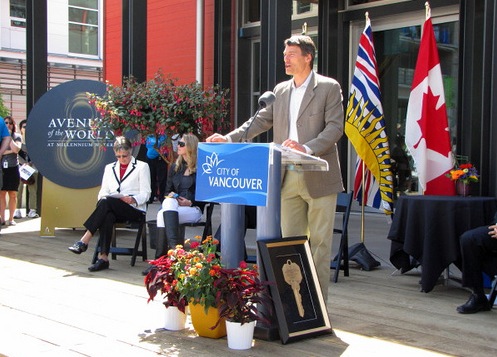 nonREgirl at vancouvercondo.info 30 Aug 2010 1:06 pm – “CBC radionews at 1pm reported “The Mayor of Vancouver is worried about sales of Olympic Village condos. He says they are not selling fast enough and worries about another real estate slump.”
[Any reader with a soundclip or verbatim transcript, please send it along. -vreaa]

Posted in 08. Overextended Buyers, 14. Social Effects of the Boom, 15. Misallocation of Resources

A commentary from 6 months ago, but topical nonetheless. The numbers are unchanged. How long before this discrepancy in fundamentals reconciles? -vreaa

[After decribing difficulty renting out high end suites] “The thing that is really interesting is that in Vancouver, these suites are incredible value [for renters]. The suite at Harbour Green is actually worth about 4 million dollars. So if you work it out with the cost of today’s money, with maintenance & taxes, it would be about $22,000 a month to own. So to be able to rent it for $6,000, a brand new suite, that’s an incredible deal. The reality is that in Vancouver there is not enough people to be able to rent these suites out, we are not London or New York, we are just a sort of relatively small city.

“A lot of our clients do have a huge amount of equity, especially if they are in the market, trading up.”

During asset bubbles, it is relatively easy for participants to almost imperceptibly leverage themselves into more and more exposure to the inflating asset class, thus putting themselves at risk of complete wipe-out when the bubble pops. Participants actually believe that they are being prudent, and their ever expanding paper-profit bottom line reassures them and reinforces their behaviour. The fact that they are taking substantial risk and speculating on ongoing price appreciation may not be obvious to them. -vreaa

The Bill Good show on CKNW Friday 27 Nov 2009 at 10.30 am featured discussion with Garth Turner (greaterfool.ca) and realtor Tony Ioannou of Dexter Realty Vancouver (author of ‘Buying and Selling a Home for Canadians For Dummies’). These excerpts –

Tony Ioannou – “[We are] dealing with a lot of people who think that they have to buy now because the market is running away from them. Most of the people we are dealing with are buying a property to live in… a principle residence… very little speculation in the market.. Very few of our clients are going to ‘the end’ of what they can afford.. They might be approved for a 500K mortgage, [but] they’re taking out a 300K mortgage.. They’re not overextending themselves as they might have done a couple of years ago… We still have some off-shore money coming into Vancouver and the lower mainland but much, much less than in the past. Most of the people we are dealing with are local people just upgrading, mostly move up buyers from a small apartment to a townhouse, townhouse to a house, or up to a bigger house. We’re still dealing with a lot of first time buyers.. [they are] very cautious,… they’ve worked hard to make a downpayment they’re not going to throw it away… So they’re very very cautious and slowly entering the market.”

Garth Turner, in response to the above, said that there was a “giant argument that interest rates would not stay low”. He also pointed out that the average abode cost “between 7 and 10 times the average family income” in Vancouver which was “by world standards, severely overpriced”.

Tony Ioannou continued – “A lot of our clients do have a huge amount of equity, especially if they are in the market, trading up. One quick example, I’d sold a property to a young couple in 2000, a $300,000 townhouse, [with] conventional financing, I went to meet with them last week, they now have paid off their mortgage, [their property is] now worth about $500,000 , they now have a half-million-dollar down payment to go and buy their first house”.

Garth Turner retorted – “Well, that’s exactly what scares me about this whole thing, when you have people who are taking… and in the case of that couple, I’m sure that constitutes the bulk of their net worth… anytime I see people taking the bulk of their net worth and dumping it into one asset and then trading up exactly the same asset class, and increasing their exposure as they go on and on and on…// If we do have an interest rate increase,.. if we have taxes go up,.. I cannot see the Vancouver real estate market sustaining its value going forward.”

Posted in 02. Profiting from the Boom, 05. Where do Buyers get the money?, 08. Overextended Buyers

Audio anecdote: “Hey, would you like to kick yourself?”… “Today’s real estate market could be at rock bottom, and when markets hit bottom, the winners are buying.”

At this point in the real estate cycle, to be luring individuals who are “worrying about living paycheck to paycheck” into RE ‘investment’ could be seen to be imprudent.   Listeners to Vancouver Radio station ‘CKWX News 1130’ this week (16-20 Nov 2009) were exposed to this 60 second ad about once an hour. The meaty bits are italicized. Or click here to subject yourself to the AUDIO –

“Hey, would you like to kick yourself? That’s what you would be doing if you ignore this opportunity. Today’s real estate market could be at rock bottom, and when markets hit bottom, the winners are buying. Come to a free learn to be rich workshop and discover how to join the winners based on the teachings of Robert Kiyosaki, best selling author of ‘Rich Dad, Poor Dad’, the number #1 book on personal finance. Rich Dad’s learn-to-be-rich workshop is free and happening in the Vancouver area today through Friday. This totally free workshop will introduce you to tools and strategies that could create extra cash flow and free you from worrying about living paycheck to paycheck. Don’t kick yourself next year saying “Why didn’t I invest when I had the chance?” This is your chance. Register now online at richdad*******.com or call 800-399-****. Get a free gift for attending. Registration is free. Call now 800-399-****.”

Posted in 02. Profiting from the Boom, 05. Where do Buyers get the money?, 08. Overextended Buyers