“J.J. Miller and his brother William made their fortunes in real estate, and built giant houses in East Vancouver in 1908. They then lost everything in the crash of 1913.” 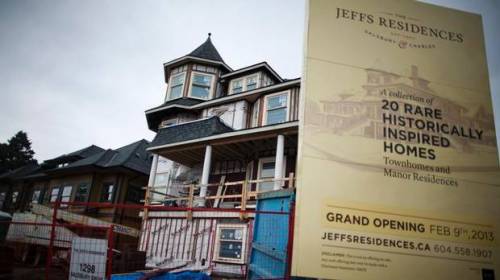 “It’s a natural that the conversion of big old mansions into multiple-unit housing can boost density and protect our heritage in the process.
As one of Vancouver’s developers found out the hard way, one of the biggest sticking points is if the neighbourhood will allow it.
Developer James Evans and architect Timothy Ankenman, who are old friends, are also responsible for two recent conversions: one in the hotbed of community activism, Commercial Drive, and the other in the polar opposite prestigious hood that is Kerrisdale.
Anybody who’s lived around Commercial knows the Jeffs Residence at 1240 Salsbury Dr. It’s a hulking three-and-a-half-storey, 1907 house that’s provided rental housing to the area since the 1920s. It was built as both residence and doctor’s office for Dr. Thomas Jeffs and his wife Minnie and their kids. The popular doctor, also a city council alderman and police commissioner, moved out of the house shortly before he died in 1923. It may be considered an old working-class neighbourhood now, but in the early part of the 20th century the Commercial Drive area was a rich person’s enclave, and the Jeffs Residence was surrounded by many other Queen Anne Revival grand houses with turrets, pitched pyramid roofs and hipped dormers.
Mr. Evans lives about a block away, so he’d walk by the house all the time and think about restoring it. One day, he contacted the owner.
“We put together a deal and went through a rather painful approvals process, ended up buying the site, and here we are today,” says Mr. Evans, standing on the job site.
The painful process he is referring to is community reaction against the loss of rental stock.
“It’s a pretty reactionary neighbourhood with anything that smells like development, so here I am, getting launched in the middle of the thing,” he says, sounding dismayed at the memory. “A lot of people in the neighbourhood know who I am, and so I was walking around the neighbourhood with a bull’s-eye on my back over the course of the year I went through it.
“Loss of rental continues to be a sensitive issue,” he adds. “And I looked into trying to use this as rental and I figured the only way I could do it was to spend $1-million on the site, which would have bumped everybody’s rents by about 30 per cent, and that’s not affordable housing anymore.”
Instead, he and Mr. Ankenman went through the process of getting the house added to the heritage registry in exchange for density and other variances. The result is a seven-unit house comprised of mostly two-bedroom units, except for the top unit, which will be one bedroom, with an amazing view from the turret. The price starts at $400,000 for a 750-square-foot condo, and Mr. Evans says he’s already pre-sold three of the units. It’s about two months away from completion.”
…
I ask him if he would do the Jeffs Residence project over again, having gone through a year under the hot spotlight of contention. He pauses.
“This one is unique,” he finally says. “There’s only one of these in Vancouver. And I’ll be able to walk past this thing in 10 years and it will look great and continue to look great, and I will get some personal satisfaction out of that.
“Will I make any money out of it? I don’t know yet. Time will tell.”
– from ‘Vancouver developers of heritage properties convert homes and hearts’, Kerry Gold, Globe and Mail, 10 Feb 2013

Thanks for the link to the above article goes to regular reader and commenter Aldus Huxtable, who adds:
“I used to live right by this development and have watched it for some time.
It’s a fun story we can watch play out over the next few years.
Down the block is J. J. Miller’s Kurrajong, a heritage house [photo below].
It’s also really important to read the heritage waymarker [see below].
J.J. Miller and his brother William made their fortunes in real estate, and built this giant house on Salsbury in 1908. They then lost everything in the crash of 1913.” 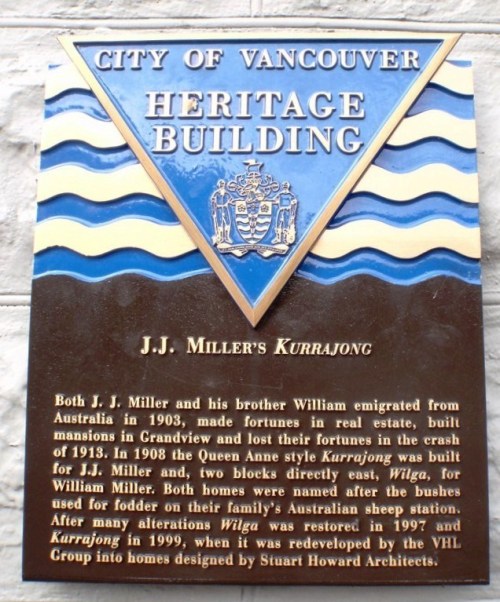 This entry was posted in 11. Regrets about Investing in RE, 12. Effects of Development and tagged Anecdotes, British Columbia, Bubble, Canada, Construction, Housing, Real Estate, Speculators, Vancouver. Bookmark the permalink.

6 responses to ““J.J. Miller and his brother William made their fortunes in real estate, and built giant houses in East Vancouver in 1908. They then lost everything in the crash of 1913.””