Don R. Campbell, President of REIN, In His Own Words – “Bubble, bubble boil and trouble! I just keep hearing this whole thing about bubbles this and bubbles that… It’s not a bubble. It is a very readable cycle.” 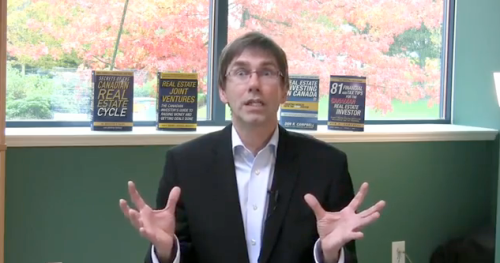 “Guess what? Bubble, bubble boil and trouble! I just keep hearing this whole thing about bubbles this and bubbles that.. and I just wish people would start paying close attention to the underlying Real Estate Cycle and the market drivers and the market influences rather than this amorphous bubble idea that keeps floating around… pun intended… that there’s this thing that’s going to burst.
Let’s talk about the condo market, that’s the one that everybody’s taking about “Oh my goodness there’s a big bubble going in condos”..
I like to invest in a property that exists, but let’s talk about prices, demand…
Take a look at some of these numbers… in 2010 there’s going to be 6,693 new condo units that were occupied and moved in… now 2011 15,902 units.. twice the number being put into the market.. big number, let’s be realistic… ah, but they were still being sold… 80, 90, 100% percent sold… but here’s the issue that you’re going to see… 2012 pre-construction totalling 25,893 units… 108 projects already being built… those condos are going to come onto the market over the next couple of years… let’s think this through quite clearly. If you’ve got that giant influx, it was pretty hot at 2010 at 6,000, it was super-hot in 2011 with 15-16,000… we’re going to add another 10,000 units over the 2011 number?.. wow, think of how that market is going to try to absorb this. Now, here is something that you’ve gotta know, is the average price will not be dropping.. why is that? quite clearly, is the contracts have been signed, they’ve been signed over the last couple of years, during this super hot market… so those contracts won’t come in and get registered into the average price of a condo until the keys are handed over, and that’s usually, what, a year and a half, two years, after the contracts signed. So the heat that we’re feeling here will carry through on the average price over the next couple of years. But as the market supply demand starts to get a little bit out of balance, starting in 2012, especially late 2012, you’ll probably start to see some discounts… or some ‘price slowdowns’ in that market as supply outstrips demand.. and contracts signed then will not play out until 2014.. so you’re not going to really see an average price collapse or bubble explode or any of these other terms I get to see tossed around all over the place.. because it’s all about the contracts and when the keys are handed over. So, let’s be realistic… We get 26,000 units coming onto the market in 2012, we have another 17,000 in 2013… people say “But Toronto is growing by 100,000 people per year.. but can’t we step back a little… when you’re either immigrating or migrating, the majority of those people are not going to be able to step in and afford $2,500 – $3,000 rent for a new unit, or have the money to buy one of these units. So, although the population is growing, the people who can afford to buy these properties aren’t growing. So why do I bring this up? Because, inevitably, you’re going to see that cross of the supply and demand line, you’re going to see incentives come into the market, and you’re going to see… let’s use the term ‘negative influences’.. on the market… you’re going to be seeing people buying five, six, seven units, from off-shore, and then wondering what they’re doing come 2013-2014, and those properties will then be dumped onto the market to try and realize some capital. So, let’s be realistic about the condo market: It’s not a bubble that’s going to go ‘kaboom’… What it is is a very readable cycle, that has market influencers, and market drivers, and your job is to step back from the frenzy, and when somebody says to you “This time it’s different”, run away as fast as you can… because over the last 20 years we’ve heard that three times only to see the market flatten and or fall off. Never buy something you don’t understand. Be smart. Invest well. See you soon.”
– ‘Real Estate Bubbles… Fact or Fiction’, self posted you-tube video, Don R. Campbell, President of the Real Estate Investment Network™, 8 Nov 2011

One man’s “very readable cycle” is another man’s bubble. – vreaa

22 responses to “Don R. Campbell, President of REIN, In His Own Words – “Bubble, bubble boil and trouble! I just keep hearing this whole thing about bubbles this and bubbles that… It’s not a bubble. It is a very readable cycle.””