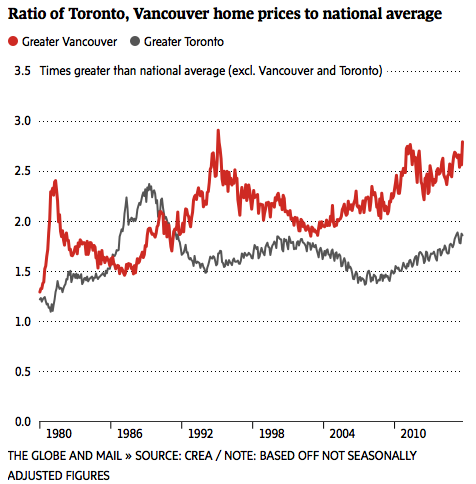 In Greater Vancouver, the average residential sale price was about $947,000 in October, and for Greater Toronto it was roughly $631,000. Excluding both areas, the national average price was just over $339,000.
For Vancouver, it amounts to an average home price that is 2.79 times greater than the national average. The October ratio is Vancouver’s second-highest on record, eclipsed only by a peak of 2.91 reached in February of 1995. For 76 consecutive months, Vancouver’s price-gap ratio has run above its 35-year average.
– G&M, 18 Nov 2015

38 responses to “Ratio of Vancouver Home Prices to National Average”