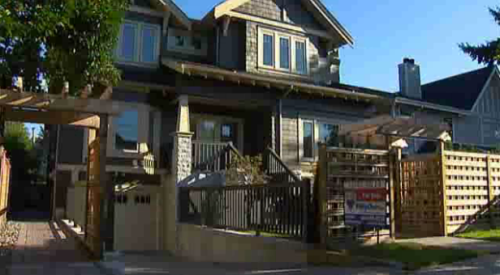 CHRIS BROWN: “At first glance Philip Chan’s property in popular Kitsilano would seem to support those who believe the crash is upon us. It’s a very nicely finished 1,700 square foot newly built unit in a triplex. Back in March it came on the market for $1.79 million, including sales tax. It’s now 1.57 million. That’s an almost 12 percent price drop.”

PHILIP CHAN: “I think the market actually during the last six months has adjusted downwards. I think everybody know about that. And it went up too fast and it’s just taking a little bit of an adjustment.”

CHRIS BROWN: “Describing a $200,000 price drop as an adjustment is just the kind of thing those who believe the market is unsustainable seize on. They argue it tries to sugar coat the ugly reality that prices are tanking. Chan, who built this home is a realtor who’s also trying to sell it, doesn’t believe that.”

PHILIP CHAN: “Unit like this, I think you can find no more than 10 on the market at this moment. How much can it drop?” 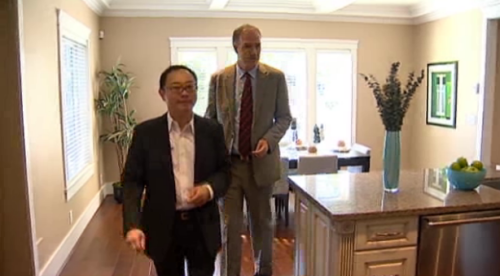 CHRIS BROWN: “At his Kitsilano property owner and realtor Philip Chan is sounding confident the market won’t slip much further from the 10 or 12 percent it already has.” 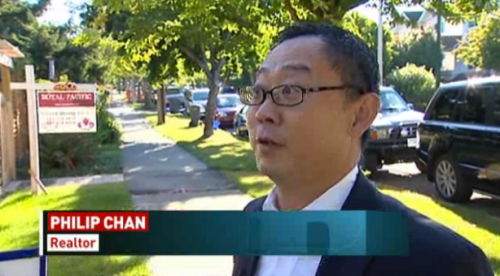 PHILIP CHAN: “Nobody can predict the future, so if you see that the market is healthy enough and you can afford to do it, do it. You can either sit by the ballpark and you watch the game or you can go down and play the game. You might get hurt or you might win.”

Noteworthy for the following:
1. Another realtor who is also a real estate speculator. (How many people in Vancouver have their livelihood and their investments all tied up in the RE sector?).
2. Strongly biased commentator being presented by the media as a potentially valid source of information about the market.
3. “It’s just taking a little bit of an adjustment.” = ‘It’s Only A Flesh Wound’. Price drops thus far are significant because, along with high inventory and dropping sales volumes, they herald far larger price drops to come.
4. “How much can it drop?”. Well, triplexes like this in Kits will perhaps sell for about 500K-600K in the trough, so the answer is “more than 66%”.
5. “Nobody can predict the future…” Faux market agnosticism, and weasly self-contradiction. He’s already predicted the future by saying “How much can it drop?”, now he says “Nobody can predict the future”. Thinly veiled CYA?
6. “…so if you see that the market is healthy enough and you can afford to do it, do it.” What does ‘afford’ mean? Afford the monthly payments? Or afford to watch your net worth drop by $1,000,000?
7. “You can either sit by the ballpark and you watch the game or you can go down and play the game.” Noteworthy for:
(i) the sporting metaphor (Vancouver RE is, after all, “a sport“), and
(ii) the kind of bravado that has been very common amongst the bulls all the way up. (Have you got what it takes to play the game?) It’s looked silly to those of us who saw what it was on the way up. It is now an appeal of last resort.
8. “You might get hurt or you might win.” Love the lottery innuendo (“Hey, You Never Know!”). Quite alright for a couple of bucks on a flight of fancy; less so for a $1.57M bet.
– vreaa