The Disinvested – A Few Disparate Thoughts On The Vancouver Riots 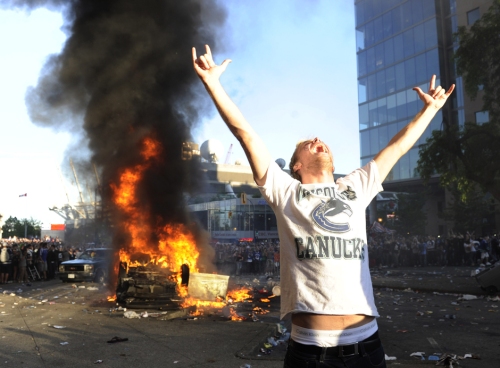 Rioters = people less invested in a society, or at least capable of being less invested for an evening, when fueled with booze and testosterone.

Interesting that the typical riot shot or ‘riot pose’ adopted by the young male participants, is one with arms thrust upward and outward in a V, as if proclaiming some kind of victory, or drawing power from the carnage behind. Ergo, these are people who spend most of their time walking around feeling powerless?

The boutique and upscale display window, the BMW or Hummer, is the magnet for trashing, upscale consumer goods the key item for looting.

The riot appears to be a fun event for the participants, but also something that helps define them, assert their individuality — ironically, while part of a mob. The Canucks fail to make them feel good about themselves, so they take matters into their own hands. Surreal to see “Kesler” and “Luongo” and “Sedin” running around inside the Bay and outside smashing and looting. If the real Luongo can’t get it done, I’ll just do it myself.

A few disparate thoughts, perhaps held together by the notion of ‘investment’ — the various meanings of that term, the lack of it, and perhaps the distortion of its meaning by the broader Vancouver society. We feel invested if we own a house or a condo, or earn enough to buy $500 hockey tickets, or designer handbags and shoes, or fancy automobiles. As the society has become increasingly focused on consumerism and sensory experience, on houses and home renovation, and the price of admission to that society climbs increasingly higher, the notion of what constitutes a healthy society in which everyone can feel invested becomes increasingly murky.

I don’t think the rioters are ‘dispossessed’ in any real sense of that word, but I do think that a riot of disaffected, bored bottom-feeders in a consumerist hierarchy tells you something about the nature of the broader society. 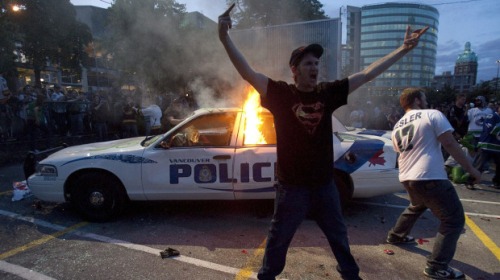