The Froogle Scott Chronicles: Mortgaging Our Souls In Paradise – Part 2: Up, Up, Up: Winning the Real Estate Lottery

Asset bubbles do most of their damage through the misallocation of resources. Money is directed to projects that would be deemed imprudent, or even useless, in more normal times. Human energies are distracted by the promise of easy riches. Young people who would have studied engineering become stock-brokers, or realtors, or construction workers. People who would normally be focused on their work, their family, their leisure pursuits, become distracted by their neighbour’s or coworker’s sudden, easily-acquired, life-changing wealth. Doctors reduce work hours and flip condos; Architects drywall or trade stocks; Teachers become roofers; Poets, landlords. Productive citizens cash out, retire early, and move away. What effect does all of this distraction have on our city, our society?  Froogle Scott generously shares his experience. -vreaa

Part 2: Up, Up, Up: Winning the Real Estate Lottery 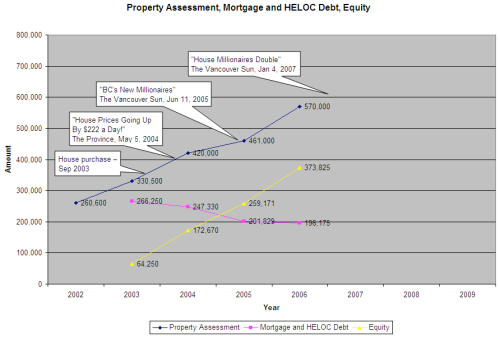 .Next Episode
“What About Everybody Else? Getting Priced Out Forever”
In the latter half of the 1980s I was a student at the University of British Columbia, augmenting my student loans by working part time as a bartender in one of the student bars. . . . One evening one of the food prep guys — let’s say his name was Mike — told me that he and his mother had just bought a house on the East Side, the traditionally working class part of Vancouver. . . . I remember the price he and his mother paid: $90,000.

7 responses to “The Froogle Scott Chronicles: Mortgaging Our Souls In Paradise – Part 2: Up, Up, Up: Winning the Real Estate Lottery”